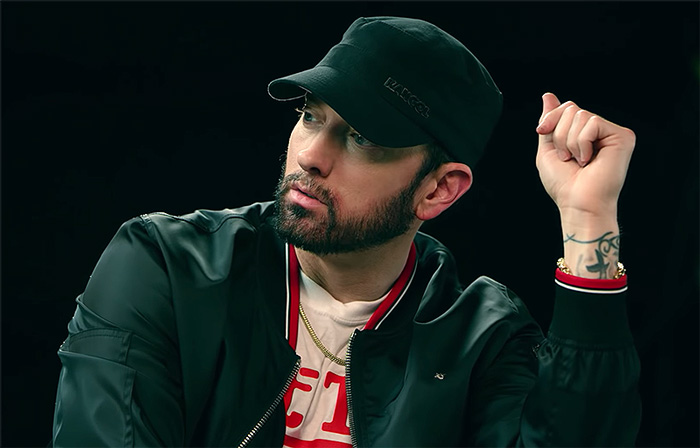 Part 2 is where it’s at.
Eminem and Sway Calloway share part 2 of their Kamikaze interview. As expected, the Detroit legend talks about Joe Budden, and why he decided to diss Machine Gun Kelly.
On his issues with Joe Budden
“Me and Joe Budden aren’t friends like that. We didn’t go the same fuckin’ high school or something, so I get that part,” said Em. “But, when I’m out here flying around to different places and doing interviews and trying to use my platform to pump up Slaughterhouse every chance I get and you’re using your platform to fuckin’ trash me,” he later adds. “You don’t owe me nothing, but I’ve never gone in a fucking interview and been like Joe Budden’s shit is fucking trash. That last album he put out is fucking trash.”
He also touched on Slaughterhouse and why their long-awaited “Glass House” album got shelved.
“There was definitely enough songs to put an album out, but for the most part, it wasn’t a complete picture because everybody wasn’t on the same page of what their favorite songs were,” Em explains. “So I thought they were gonna to go back home, regroup, and try to make a few more songs. I didn’t hear anything from that, and at that point, I started getting really deep into Revival.”
On “Fall” Eminem rapped, “Somebody tell Budden before I snap, he better fasten it / Or have his body bag get zipped / The closest thing he’s had to hits is smackin’ bitches.” When host Sway asked him about the track, Em explained saying, “That was a tap, but it was also saying that his alleged domestic abuse things or whatever, which I’m not going to get into, but I feel like the reason I had to do that was because there’s a fine line between saying, you know what, ‘This guy’s really been cool to me. He’s helped me out and tried to help out on many occasions, so I’m not gonna go in on ‘Untouchable’ like that.’ I’m gonna say, it ain’t for me. I’m not crazy about it. To be the worst song that you’ve ever heard in your life? Have you listened to your own shit?”
As for why he chose to diss Machine Gun Kelly on ‘Alike’ … Em revealed that it had nothing to do with his daughter Hailie.
“The thing that was going on that he was saying about my daughter, I didn’t know about that until literally like a year-and-a-half later. It never hit my radar. Then, one day — you know you go down the wormhole on YouTube — I see, ‘Machine Gun Kelly talks about Eminem’s daughter.” I’m like, ‘What the fuck.’
“Then he starts doing a press run basically about Hailie. I’m like, ‘What the fuck. Yo, my man better chill.’ That’s not why I dissed him. The reason I dissed him is actually a lot more petty than that. First what he said, ‘I’m the greatest rapper alive since my favorite rapper banned me from Shade 45.’ Like I’m trying to hinder his career. I don’t give a fuck about your career. You think I actually fucking think about you? You know how many fucking rappers that are better than you? You’re not even in the fucking conversation. I don’t care if you blow or if you don’t blow. Doesn’t matter to me.”
On Rap Devil, MGK’s clap back at Eminem. The Cleveland rapper accused shady of trying to sabotage his career. When asked if he phone called Diddy demanding an apology from MGK, Em responded with “Fuck no! I never made a call to Diddy. Really? Never happened,”
Watch the full part 2 below.