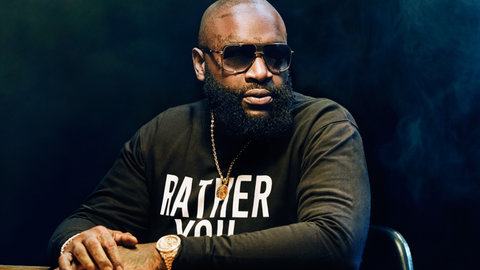 Rick Ross was rightly dragged for his immature comments about not hiring female rappers. During his most recent visit to The Breakfast Club, the MMG Bawse was asked why he hadn’t signed any female artist to his label.
“You know, I never did it because I always thought, like, I would end up fucking a female rapper and fucking the business up,” He said. “I’m so focused on my business. I just, I gotta be honest with you. You know, she looking good. I’m spending so much money on her photo shoots. I gotta fuck a couple times.”
After being called out for his misogynistic slurs, Ross admits he made a mistake and issued an apology via Facebookon Thursday (July 27).

“I want to address an insensitive comment I made on a very sensitive issue, especially in a minority dominated industry like hip hop. My entire empire’s backbone is led by 2 of the strongest people I know and they happen to be women, my mother and sister. The operations wouldn’t run without them and I have the highest regard and respect for women in this industry. I have a daughter myself, my most cherished gift in the world.

My comment is not reflection of my beliefs on the issue. A mistake I regret. I hope to use my mistake, my platform and the community to create positive discussion to implement change on a very important issue. respect for the ones who stand up to say hey that isn’t right. Now it’s time to accept responsibility and all do better.”

Renzel premiered his new VH1 reality show “Signed” on Wednesday night (July 26), which according to him features many talented female artists.
“I look forward to continue working with & supporting female artists. my discovery process was documented by vh1 on #signed which premiered last night. Many of the most talented artists you’ll see in the running to be the next #MMG superstars are female artists. I look forward to clarifying my comments through my support.”
“Thank you to everyone who’s going through the journey with me,” he added. “we coming out everyday stronger.​”
Ross tried to back up his support for female MC’s by uploading a picture of himself and a late female rapper, Lundy who was affiliated with his label before her death.
I know his intentions for posting the above image is good but I can’t help but wonder if this was how she got by — “I’m spending so much money on her photo shoots. I gotta fuck a couple times.”
Ross is currently walking on thin-ice as his rape remarks on Rocko’s ‘U.O.E.N.O.’ is still fresh in the memory. “Put Molly all in her champagne, she ain’t even know it/I took her home and I enjoyed that, she ain’t even know it.”